All Products
Flash⚡Sale
Special Offer
New Customer
O-Fan-Club
About
Home Blog You must know the Battery Type of the Torch! You must know the Battery Type of the Torch!

The power consumption of current LED flashlights is generally not small. From the perspective of economy and environmental protection, for flashlights, it is recommended to use rechargeable batteries as the main energy storage device, and non-rechargeable batteries as backup options. For enthusiasts, the most ideal battery is a rechargeable lithium battery, which has high energy density, high discharge voltage, no need to consider memory effect, economy, environmental protection, etc., and has various advantages.

In the beginning, We will give you a brief introduction to the basic knowledge of lithium batteries, and then I will post olight commonly used lithium batteries. There are many types of lithium batteries in terms of packaging, materials, and shapes. When we buy flashlights, we always see the use of AAA, AA, CR123A, 14500, 16340, 18650, 26650, and other batteries, so what do these numbers represent?

AAA and AA here are No. 7 and No. 5 batteries, and the following numbers are actually the identification method of industrial lithium battery cells. They are composed of 5 digits. The first 2 digits are the battery diameter, and the three or four digits are marked. is the height of the battery in millimeters. 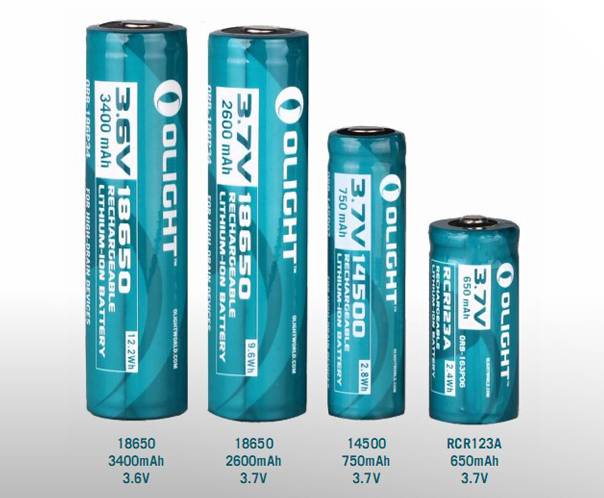 The 10440 battery is a lithium battery with a diameter of 10mm and a height of 44mm. It is the same size as the "AAA battery" we often call it. The battery capacity is generally small, only a few hundred mAh. It is mainly used in mini electronic products. Such as flashlights, mini stereos, amplifiers, etc.

The 14500 battery is a lithium battery with a diameter of 14mm and a height of 50mm. This battery is generally 3.7V or 3.2V. The nominal capacity is relatively small, a bit larger than the 10440 battery, generally 1600mAh, with superior discharge performance and the most application field. The 14500 is also widely used, and the reason is very simple. Its volume is the same as that of an AA (No. 5) battery, and it can be put into a flashlight using AA batteries. Of course, it must be supported on the circuit. Mainly consumer electronics, such as wireless audio, electric toys, digital cameras, and so on.

3. 16340 battery
The 16340 battery is a lithium battery with a diameter of 16mm and a height of 34mm. This kind of battery has a shorter ruler height and a smaller capacity, so it can be used in strong light flashlights, LED flashlights, headlights, laser lights, lighting fixtures, etc. occur frequently.

4. 18650 battery
The 18650 battery is a lithium battery with a diameter of 18mm and a height of 65mm. Its biggest feature is that it has a very high energy density, almost reaching 170 Wh/kg. Therefore, this battery is a cost-effective battery. We usually often Most of what I see are this kind of battery, because it is a relatively mature lithium battery, and the system quality is stable in all aspects. It is widely used on occasions with a battery capacity of about 10 kWh, such as in mobile phones, laptops, and other small appliances.

The 21700 battery is a lithium battery with a diameter of 21mm and a height of 70mm. Because its volume increases, the space utilization rate increases, and the energy density of the battery cell and the system can be improved. Its volume energy density is much higher than that of the 18650 battery. It is widely used in digital, electric vehicles, balance vehicles, solar energy lithium battery street lights, LED lights, power tools, etc.

The flashlight with CR123A battery can obviously be very small in size, such as the olight S1R BATON, the barrel length is only 61 mm, the head diameter is only 21 mm, and the weight without battery is only 30 grams. It is very small, very light.

Usually, in addition to these general battery models above, there are some products that are specific batteries.

About the battery with protective plate

About storage and maintenance