Home Blog To Be An Enthusiastic Camper With Olantern To Be An Enthusiastic Camper With Olantern

There was a time when campers prided themselves on 'getting back to nature' and living the simple life, sleeping under the stars with just the basics for cooking and washing. You can consider an Olantern, and it's worth buying one if you plan to stay camping in one place for nights pure with cold air and lit with stars.

The Inspiration Of Olantern’s Creation

The use of oil lamps began thousands of years ago and continues to this day, although their use is less common in modern times. Oil lamps are a form of lighting and were used as an alternative to candles before the use of electric lights.

Starting in 1780, the Argand lamp quickly replaced other oil lamps still in their basic ancient form. These in turn were replaced by the kerosene lamp in about 1850. In small towns and rural areas, and the latter continued in use well into the 20th century, until such areas were finally electrified and light bulbs could be used.

Today, the history of lighting with oil lamps has been rewritten. With the development of LED, our life has a new light source. The traditional shape, coupled with modern technology, fascinates people who like the outdoors and camping, and let the generation that has grown up nostalgic for it.

The Company That Olantern Provides

|I went to the woods because I wanted to live deliberately ...

I wanted to live deep and suck out all the marrow of life!

To put to rout all that was not life...

And not when I came to die, discover that I had not lived...

An ownership experience is essential to a successful camping trip. The peace and comfort of your desired rest dependent on the arrangement of the scene. Put a pot of ground coffee, take to lake by your boats to fish or reading in the shade of the trees... It cannot be less with a perfect camp lamp as evening approached. Let's find out more about the utility of Olantern.

Part One: Overview Of Olantern

OLIGHT Olantern is an excellent all-around lantern, giving out an even, steady 360-degree lighting distribution. It is powered by four 1900mAh lithium-ion batteries rechargeable via the magnetic charging cable and runs up to 80 hours.

The white light LED module (3 adjustable settings) and flaming LED module are replaceable for fun and scenario-based illumination. The battery indicator around the button indicates the battery level. A recessed type power button can prevent mistakenly touching; while a stable base and the hanging hook are available for several placement options.

The silicone on the outer surface is made for comfort and a firm grip.

When the hook is unlocking, you can put the Olantern flat on a table without compromising lamplight.

The high-performance LED combined with transparent cover ensures an even, steady 360° light distribution.

Due to the recessed type design, the power button has the function of preventing mistakenly touching.

Meanwhile, you can grope blindly for the power button in the dark easily with the special design.

The main function of the flaming LED module is not to illuminate a large area, but to provide a soft light within one meter. Wherever you place it, its low color rendering will add a romantic ambiance on a quiet night. 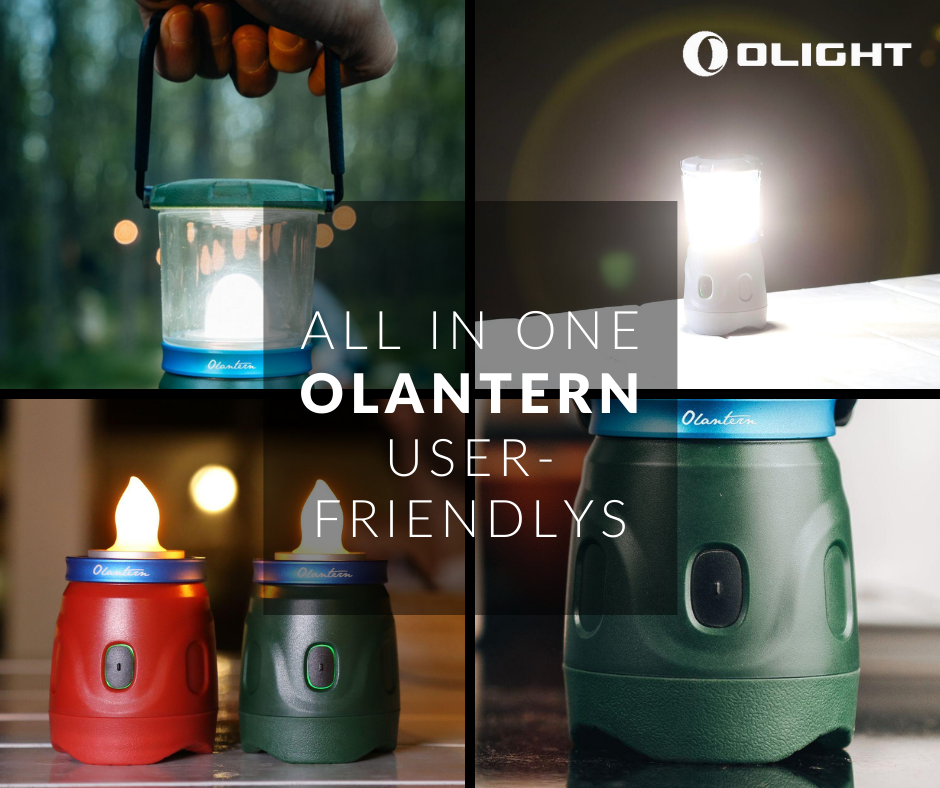 OLIGHT Olantern can be used in many situations, such as camping, hiking, outdoor barbecue, and so on.

Overall, it is of excellent workmanship, and the details are very user-friendly.

Whether the flaming LED module made a deep impression on you? Featuring two interchangeable LED modules, the Olantern allows you to switch between a standard white light or an ambient flickering flame. That is to say that the innovative design of replaceable modular lamp group can be well-received by everyone.

Small and exquisite designs always remind you of carrying the light to show your path and fear none whatsoever.