Home Blog How to Prevent the Torches From Overheating? How to Prevent the Torches From Overheating?

The reason why the torch is hot

Generally, the high-light torch does not generate heat when it is used at ordinary brightness, but it is easy to feel heat when it is used at high brightness. This is because the realization of the high-brightness function requires high-power energy to drive. At the same time of driving, the LED will generate a certain amount of heat, which is a normal phenomenon. If the highlight function is used continuously, the heat will accumulate more and more and continue to spread out. Generally speaking, the heat dissipation of high-power torches or other flashlights is the heat dissipation of the shell. So you will obviously feel the flashlight heating phenomenon.

1. Fever is related to the core of the Torch.

The torches with higher power consumption will generate more heat. The higher the core level of the torches, the higher the photoelectric conversion efficiency and the less heat loss. This process obeys the law of conservation of energy.

2. The heat generation is related to the drive circuit of the Torch.

Torches drive circuit can be roughly divided into direct drive and constant current drive. The current of the direct drive circuit is not controlled. When the battery power is high enough and the voltage is high, the battery will do its best to supply the LED needs. At the beginning, the flashlight will be very bright, the temperature will rise suddenly, and the heat and heat dissipation cannot be balanced. The brightness and temperature will slowly drop after the battery is gradually exhausted. Due to the high current of this circuit in the early stage, it is very harmful to the LED and the battery.

The life of the LED strong light flashlight often cannot reach the design life, and the battery will also be shortened due to the overloaded working life. This kind of "quick success" unlimited current drive solution can only be seen in low-end flashlights. In the early stage of the torches work, the effect will be slightly better, and it will weaken rapidly with the advancement of time. The constant current drive circuit of LED strong light torches belongs to the current mainstream drive scheme. The circuit will control the current supplied to the LED so that the current remains at the same level.

3. The relationship between heat dissipation and the volume of the Torch.

The small size of the torches has a small surface area on the outer casing, and the heat of the large-volume torches will feel slightly different. Usually, such flashlights do not use over-power LEDs as the core light source.

How to prevent the torch from overheating?

1. Choose a torch with a smaller volume and smaller lumens, which is more suitable for indoor use. Generally, this kind of power is smaller and will not overheat.

2. If you want a torch with high power and not overheating, you must choose a product with a heat sink.

The low beam luminous flux of OLIGHT's Marauder 2 is as high as 14,000 lumens. At the same time of high output, in case of obstacles or excessive temperature, the torch head will be damaged. The light sensor and the built-in temperature sensor in the fuselage will ensure the safety of the torch through automatic downshifting; the more dynamic cooling fins increase the heat dissipation area and speed up the heat dissipation. 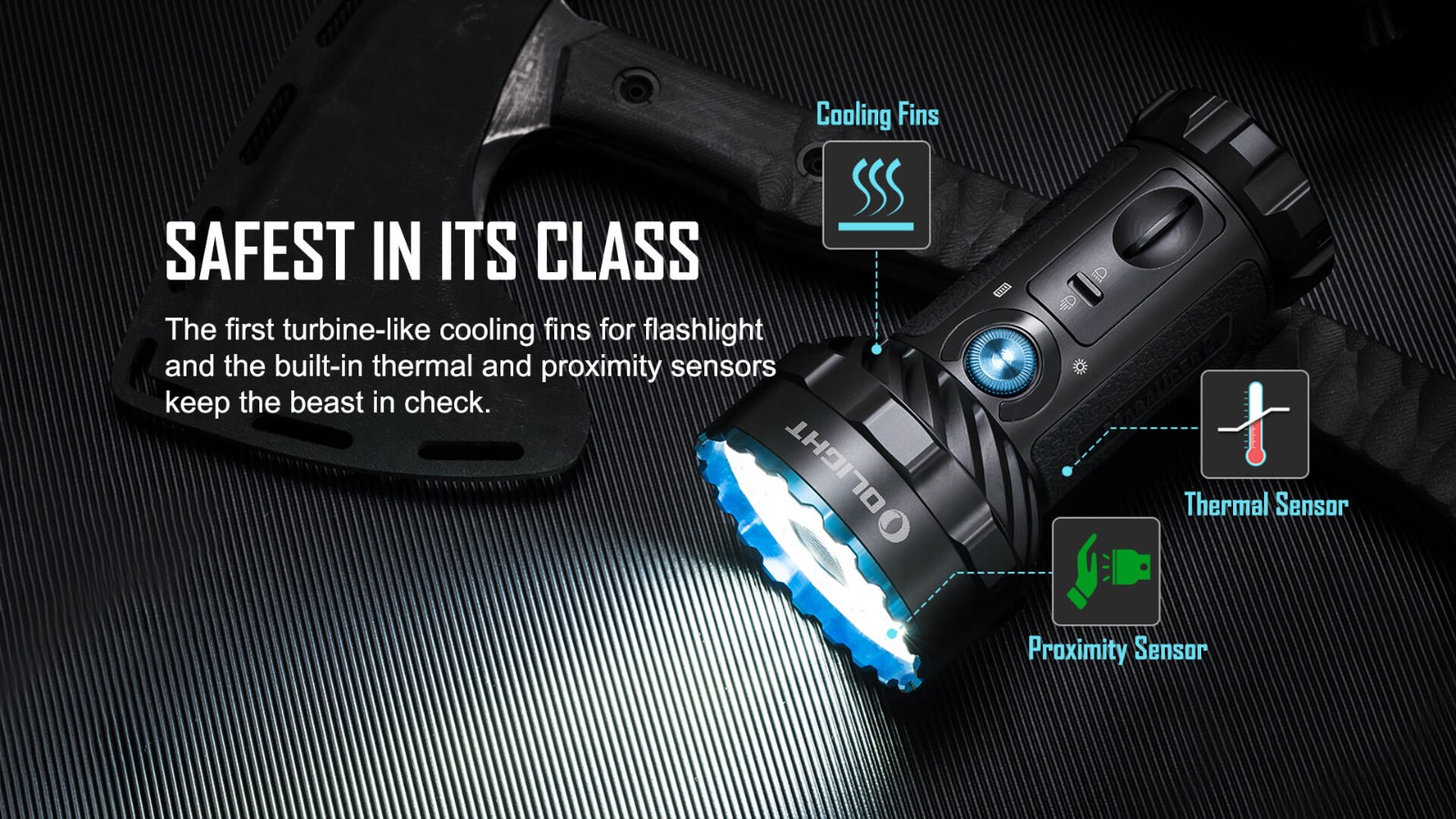 There's also the X9R Marauder, the largest and highest output flashlight Olight has ever produced, hitting an incredible 25,000 lumens, and a custom cooling system ensures that the flashlight provides a constant and safe high output setting. Output settings are controlled via a side switch, with 8 blue indicators on each side showing your output level, remaining battery capacity, or charging status.

3. When using it, it is not recommended to use the highlight function continuously for a long time. You can occasionally turn off the high-power torches and turn them on for a while.

Previous
Several Units About the Brightness of the Torches: Lumen, Candela and Lux
Next
Multi Coloured Torch Light